As we increasingly give a scrap about how much we waste and how we can reclaim it, trash has become a serious source of inspiration for artists and innovators. There’s been a boom in crafty upcyclers who transform landfill-bound items into elegant items like jewelry made from electrical odds and ends. There are also those who create thought-provoking pieces with “trash” that comment on social whims, tastes and behavior.

Then, there are interactive art-ivists like New York City graphic designer and master composter Debbie Ullman, who has launched a clever food waste project that challenges people to think outside the box as they deposit food scraps inside of one.

The New York Compost Box Project reimagines decommissioned newspaper boxes as receptacles for compostable materials. The boxes are currently up and running at Earth Matter on Governor’s Island, the Urban Garden Center in East Harlem, and at the East Side High School Community Garden in the East Village, all places with on-site compost systems. In addition to providing an unexpected, inviting and convenient place for locals to bring compostables, the boxes pay homage to the decaying print media from which Ullman’s early career sprang.

I caught up with Debbie to dish dirt on why compost is her muse, how we can battle compost apathy, and the unexpected dangers of making art out of heavy metal boxes. (Spolier alert: she’s in a cast.)

How does art fit into compost education?

Debbie: I consider this project to be an urban intervention. It is a response to the social community, the built environment, and public space. Some of the goals of the project are to create a new awareness of composting and to stimulate community involvement and interaction. I wanted to create an unexpected experience by up-cycling the boxes which are such a part of our urban fabric but are quickly becoming ‘yesterdays news.’

Why the newspaper boxes?

Well, I spent more than a decade as a designer for the New York Daily News. As print publishing is going the way of the dinosaur, these boxes are becoming yesterday’s news. The boxes are so commonplace in the city and I wanted to subtly tweak them to make people stop, look twice and think about what they are seeing vs. what they expect to see. Plus, newspaper can be a decent source of carbon for your compost pile. And playing off of the word ‘Post’ was a gimme. A US Post Office box was harder to come by. And, no, I didn’t steal the boxes. The boxes used in this project were decommissioned. One came from a newspaper I worked for and the others were bought from a prop house that went out of business.

Debbie Ullman catching up on the news. Photo by Ilona Lieberman.

How did you fall in love with composting?

It started in the early 2000s. I went to a worm composting workshop at Solar One. I had been a vegetarian for many years but it can be easy to be an unhealthy vegetarian. I was so in love with my worms that I had to eat better to feed them. So, I started juicing a lot. The worms were good conversation when people came over and a good litmus test for first dates. I also hate waste. The first thing I did when I lost my job at the Daily News was apply for the NYC Compost Project’s Master Composter Certification class.

What do you think keeps New Yorkers from composting?

New Yorkers are really good at finding excuses for stuff.
Common excuses I’ve heard for why people won’t compost include:
“It seems complicated.”
“I have no space.”
“I don’t want to have to buy stuff.”
“I have too many cockroaches as it is.”
“My roommates will kill me.”
“Methane will seep out of my bucket and kill me.”
“I’ll kill the worms.”
“I told you I already have cockroaches, I don’t want worms also.”
“I have no time.”
“It will smell.”

What will inspire New Yorkers to compost more?

Maybe there needs to be a campaign featuring one of the Yankees or something. Make it sexy…and easy and convenient or shame people like they did in Seattle. Composting food is mandatory in Seattle and if the city found 10% or more of recyclables or food scraps in the trash, they put a huge red sticker on the bin. Like, look at my neighbor, Hester Prynne trying to get over. That was temporary. I think now, they are handing out fines.

We could also gamify composting somehow. Waste Management gave out bingo-looking cards that people would paste their fruit label stickers on to keep them out of the compost pile. For every full card, they turned in, they received a free bag of completed compost. The response was overwhelming. Perhaps there could be a way to compost for credits toward fresh produce. Really, New Yorkers need to buy what they can consume and stop producing so much waste in the first place. 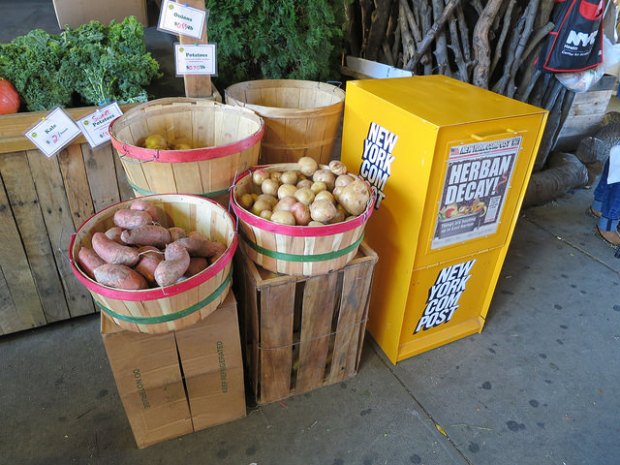 A box hanging out at Harlem’s Urban Garden Center.

Can you tell me a little bit about your other sustainability art projects and crafts?

My next ‘art’ project has to do with expiration dates, permanence and plastic. I’m a designer and a big crafter. I’m always making new things from older things. After Sandy, I turned fallen tree branches into beautiful buttons for handknit scarves. I like concrete and steel and things that will stick around for a while. I’d like to smith trowels for community gardening from NYC construction waste….and open a store with no packaging. : )

So, um, how did you break your foot?

Ha. I had the heaviest of the compost boxes (the one with the money box on top) on a little folding cart and was hauling it up over a curb cut to photograph it. It fell off the cart and onto my foot. I had only broken one bone in my life and it happens to have been the same one. The guy selling his wife’s crocheted hats on the corner ran over with a chair and helped me pick up the box (I need to make that guy some cookies). I got my photos and then went to the emergency room. : ) I guess I’m lucky that the box was empty.

Copyright 2014 | The Compostess LLC Create a free website or blog at WordPress.com.